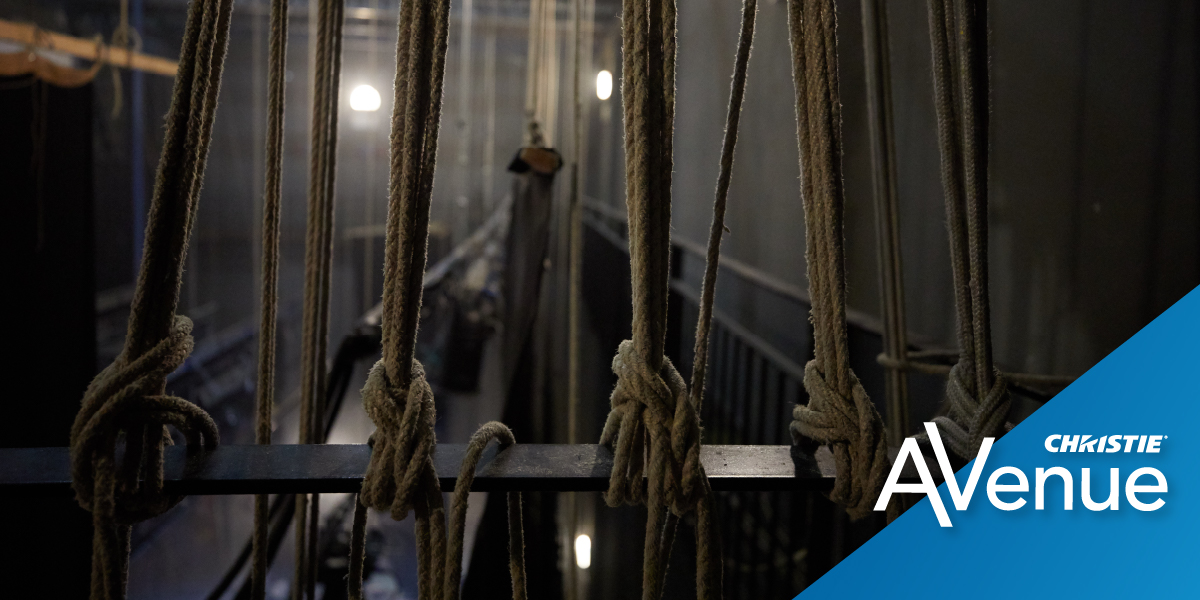 It’s AD 80 and you’re a citizen of Rome, off for a day’s brutal entertainment at the Colosseum. Today is special because your emperor Titus Caesar Vespasianus is presenting a naumachia – a mock naval battle on the arena’s flooded floor. There will be oared galleys, mechanisms to simulate shipwrecks, storm waves—and legions of roman riggers. Without those hydraulic engineers, carpenters, and the rest, a naumachia is just a very big puddle in a very big building. The moment theater – or any kind of show – moves beyond the simple mask and makeup stage somebody must build it, pull levers, and tug ropes on cue.

Not that crewing was a career back in the day: if you were a stage manager in Shakespeare’s time and needed a stagehand, you’d head straight for the waterfront taverns where you’d find any number of underemployed sailors who knew the ropes and how to follow orders. Sign a few up, get them sober, and the show was on.

For a long time, that was how it worked: casual labor plus whatever muscle the performers could provide when they weren’t acting was all there was. Purpose-built venues were a rarity too. More likely, you’d put on shows in tavern courtyards and stately homes, finding local help where you could. Perhaps the freelance tradition is still so strong in crews today because of its ancient history.

What did change was the technology. Anybody could roll a cannonball across the backstage floorboards to simulate thunder, but more specialized skills were required once things got a little more sophisticated. First came lighting: what impresario could resist the financial logic of both evening and daytime performances or a new opportunity for audience-pleasing special effects?

As candlepower gave way to gas and then electric light, sparkies (electricians) joined the chippies (carpenters) and the jacks of all trades. Every subsequent advance in technology or increase in ambition needed more skilled labor. Moving scenery just needed someone competent enough not to drop stage flats on actors’ heads, sound needed soundies, cinema needed projectionists, AV needs its techs.

Slowly, a whole crewing support system grew; an often nomadic band of practical people who made the actors and the artistes look good night after relentless night.

And waiting in the wings all this time was the whole crew-driven business of show control – and when that made an entrance boy did things change. It’s no exaggeration that there are now many occasions when the crew is the show; it’s them, the tech, carefully cued AV content, and nothing else.

What show crews can do now would seem as outlandish to those early practitioners as the magic they once struggled to simulate with sulfur and saltpeter. Today’s crews may resist the notion that they’re performers; they don’t wear stage makeup, their costume is invariably black cargo pants, T-shirt, and a laminated pass—but they’re performers, nonetheless. There’s not a problem they can’t solve or a night’s sleep they won’t give up, to ensure a show’s perfect. Their profession has a long and honorable history which is why they’re so good.