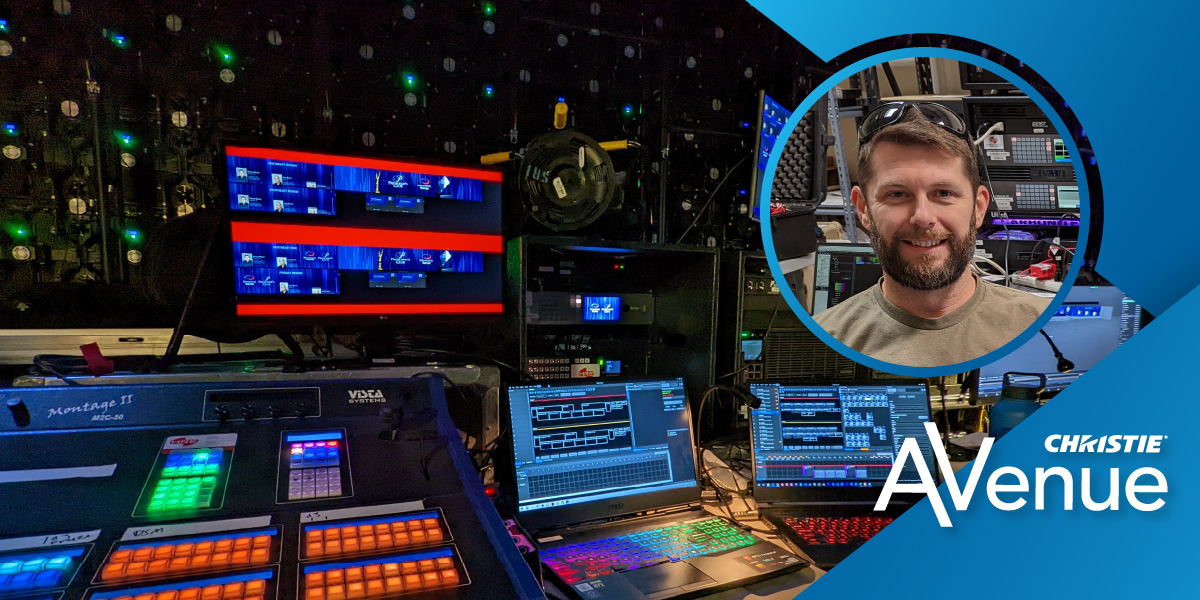 It’s just an empty hall, an unpromising, echoing shell and ever-so-slightly ragged around the edges. There is no fairy tale here.

But by plane, by truck, and in private cars, the magic is gathering: an assembly of people with the power to transform, who can take this place, or any other, and make it special. They’ll do it in just a few frantic hours and then, like all good magicians, disappear. Only to do it again the week after that and the week after that in another state, another country, another continent.

The men and women who build it

This is the crew, each with their own specialty but with the common purpose of making this show—whatever it might be—the very best. Without them, there would be no corporate events, no light festivals, or any other short-term spectaculars. Others may dream it; these are the ones who build it.

There are riggers, lighting techs, carpenters, soundies, set builders, and people like Drew Taylor of High Resolution Engineering The techies—an ever-increasing breed of ever-increasing importance—with the skill to embroider traditional theatrical skills with advanced technical sorcery. So while Drew’s skills would indeed seem like magic to, say, an Elizabethan stagehand at Shakespeare’s original Globe Theatre, they’d recognize Drew’s work ethic and attitude as identical to their own.

The hours are still as unsociable as the lifestyle is sociable. The show still must, as it always has, go on. And something about the techies who choose this career remains reassuringly free-spirited. For this is still predominantly a freelance-based business.

When Drew travels the world with his Christie® Spyder X20 and X80 image processors and their supporting gear, he does so as an individual, with new crews forming and reforming around him at each venue. Some faces he may know, some he may not, but remarkably he’ll be confident that every individual will not only know their own job inside and out, but know enough about Drew’s own, to work seamlessly with him even when time is close to running out and clients have grown anxious. As Drew says, “No matter how stressful the build, I think everybody involved just finds joy in seeing it come together. Once you’ve put trusses in the air, the screens are up, the lights and projectors are on, and you’ve got some big impactful opening video… Just seeing it all together is always rewarding.”

Have you ever seen a road crew do their work close-up? That’s the most remarkable thing. They execute their own plans and tasks with such skill and regard for their colleagues that everything fits together perfectly even though it may never have been fitted together before. And when problems arise, which they will, the effort to resolve them is a communal one; it doesn’t require meetings or long discussions, just brief huddles over rapidly cooling cups of coffee. If that carefully rigged lighting truss now has to move, it will move, if that power supply is insufficient, more power will be found. Everything, it seems, is possible.

And all this against the brutal and immovable deadline of a soon-to-arrive audience. Your only option is to be ready, for the doors will open soon. And even once they do, the pressure won’t drop. Many of the crew—who’ve already worked long hours under pressure—will now run the show, hitting precise lighting cues, seamlessly mixing video feeds, and balancing sound on the fly, their heart rates higher now than when they were hanging from a truss or trudging flight cases up 6 flights of stairs.

But then it’s done, and it worked, and the client is happy and the audience abuzz. But you must forget all that and rip down all that you so carefully built so you can do it again in another unpromising, echoing shell in another city – where your next expectant audience awaits.