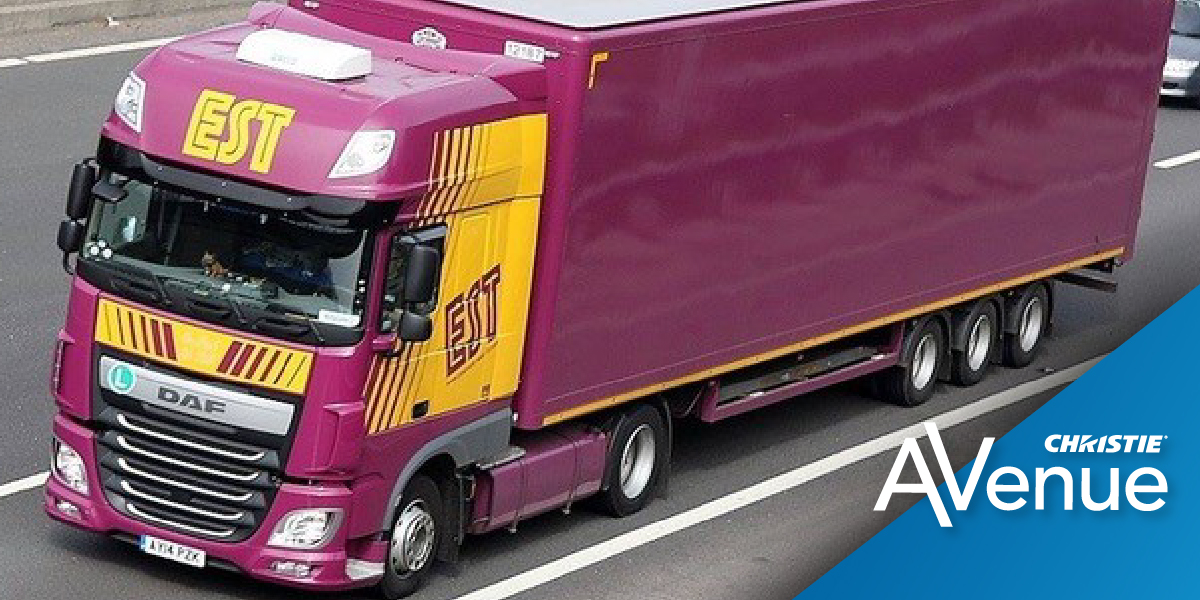 Their trucks are as big and as bold as a superstar’s spandex. Lurid purple, vivid yellow, and an unmissable sight on European motorways. “Look at me,” they say, “You Rock, We Roll.” Ladies and gentlemen, we give you Edwin Shirley Trucking – the people who get rock and roll’s show on the road.

Pick any star from the mid-70s onwards, and there’s a chance Edwin Shirley Trucking will have had their hands on their flight cases. Madonna, Springsteen, Nine Inch Nails – it’s a list as long as a convoy of 18-wheelers, and it’s not just music’s biggest names; they’ll truck for stand-up tours, live entertainment, even corporate roadshows. We can only imagine how many Christie projectors, screens, and control systems have seen the inside of an EST truck.

It all started around 1974, when Edwin Shirley (sadly now gone to The Great Gig in the Sky) and fellow lighting guy Roy Lamb decided they’d like a little more life and a little less road. The aptly named Del Roll, production manager for heavy metal band Uriah Heep, joined them a year later, also willing to risk that a rock and roll trucking company might be a more relaxing option.

Del Roll says that because they were ‘crew first, truckers second’, they understood the gig. It was clear that this could never be a simple case of ‘drop off the gear and move on’, trucking had to be embedded in the symphony of events that made sure a touring show turns up and turns on, on-time.

And they were right. For a long time, Edwin Shirley Trucking (EST) was the only game in town, their reputation and knowledge ensuring that band after band wanted to work with them. And their honesty helped too: if a band’s itinerary didn’t look right from their point of view, they’d say so, and tour managers learned to take EST’s word for it.

Those purple and yellow trucks were soon to be seen parked outside venues across the globe, and as the shows grew in ambition, so did Edwin Shirley Trucking. Del Roll reckons peak EST was reached for Michael Jackson’s ’97 “Dangerous World Tour” when he had 97 trucks on the road.

Not in it for the backstage pass

Del says it’s precise as a ballet. For a start, you need drivers with the right mindset, professionals who aren’t in it for the backstage pass or the swag but who can pirouette a truck in a crowded loading bay. Then you need a lead driver who takes charge and calls in the loads, and knows where everything is in each truck, what it does, how fragile it might be, and ensures that all the gear goes back in the same order it came out. A logistical mastermind who’s also a diplomat capable of dealing with a tired crew, anxious venue managers, and fretful artists. And you need a plan with a backup plan because things will go wrong, and it’s your job to make them right before anyone notices.

Don’t believe anyone who tells you the music business is buccaneering and free-form. EST is a highly professional, essential part of the entertainment megalith, and they know how to turn the dial up to eleven when circumstances demand. Yes, Del Roll will tell you road stories until your ears bleed, but he’s the world’s greatest rock and roll pragmatist. That trick EST livery? Says he stole it from a design on his mother’s shopping bag back in the ’70s. Not very rock and roll, but does it ever get the job done.