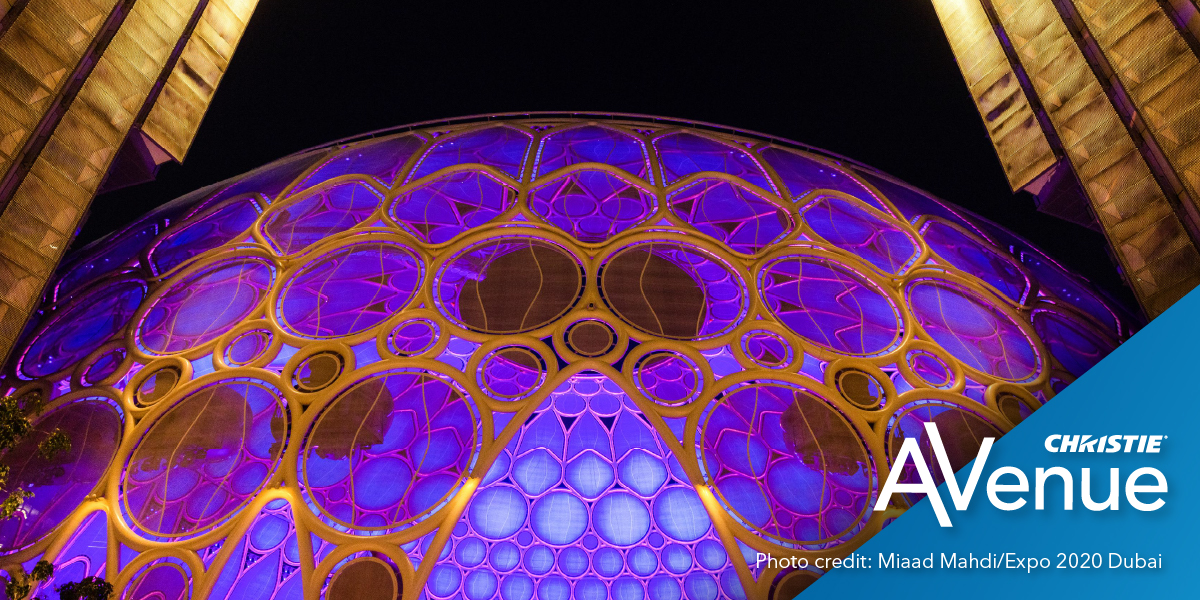 Expo 2020 Dubai’s massive scale was mind-boggling, and as one of the world’s largest cultural gatherings, its ambitions were unparalleled. Its theme—Connecting minds, Connecting the future—meant a lot of AV technology and a lot of AV techs needed to keep that technology on song. It’s one of those events with such high visibility that if you get the AV right, it’s the biggest feather in your cap—but get it wrong, and everyone notices.

And somebody, or dozens of somebodies, has to be on the ground to ensure all the technology works as advertised. By far the biggest consumer of projection muscle was the ‘beating heart’ of the Expo 2020 site, the Al Wasl Plaza dome. With 252 Christie® D4K40-RGB pure laser projectors each shining out 40,000 ANSI lumens, the dome was a huge responsibility for Official Projection and Display Partner Christie and its partner, Creative Technologies Middle East. Mike Fudge, project technologist, and Marlon Dmello, field application engineer, were just some of those “feet on the ground,” with Christie Professional Services and Creative Technology providing onsite technical and preventative maintenance support.

Dubai is an advanced, modern city, but heat and humidity make it a hostile climate for electronics. It’s not just that temperatures can reach 45oC (104°F) in the shade, they can easily hit 70oC in an enclosed metal box and boil the electrolytes out of a power-supply capacitor. Humidity regularly tops 60% and rare but damaging sandstorms can drive dust into any exposed equipment. The D4K40-RGB projector may be a robust, solid-state unit with a sealed optical path and integrated cooling, but even that needed a little help in the face of such an onslaught. So, AV techs onsite mounted the 252 D4K40-RGBs inside 42 specially designed air-conditioned pods—each large enough to hold a compact car—in stacked groups of 6 in 2 rows of 3.

Techies operated around the clock for nearly 60 days to get everything ready ahead of show, which opened in October 2021 and ended in March 2022. Even so, that level of labor would have struggled if Christie techs hadn’t had a couple of tricks up their sleeves. Once the D4K40-RGBs were installed and working, the first snapshot captured and turned into a test pattern was the dome’s own exposed skeleton. Match that pre-warped, projected template to the dome’s physical grid, and they could quickly tell that the alignment was spot-on, even if a projector needed swapping out. That itself saved hours, if not days, of frustration.

The dome’s skin, the projection surface, was also a few shades away from pure white, which could have made achieving consistent color across 252 projectors a nightmare, especially given the additional challenges of heat and humidity. Instead, proprietary Christie LiteLOCTM  technology, built into every D4K40-RGB, held every unit to a predetermined color and brightness over time in even higher ambient temperatures and humid environments. Marlon says he didn’t need to touch the color balance once; he just had to let the software do its job.

Sealed in and safe

The biggest challenge was always going to be managing that number of projectors. Yes, you could use a web browser to reach individual projectors by their IP address on the network, but that’s a laborious process with a high possibility of error. The Al Wasl dome installation is the kind of scenario Christie Conductor advanced monitoring and control software solution was made for; Marlon Dmello describes it as a game-changer. No more typing in individual IP addresses hoping every digit was correct, just a centralized, easy-to-interpret display of every projector’s status in real-time on a laptop. Conductor meant Marlon could quickly spot, diagnose, and resolve issues—even update firmware—all while the projectors remain sealed in their air-conditioned pods.

At Expo 2020 Dubai, that really mattered. In that humidity, condensation forms the moment a pod is opened, so it’s better not to open one at all, especially when you’ve so many to look after and the world looking over your shoulder.