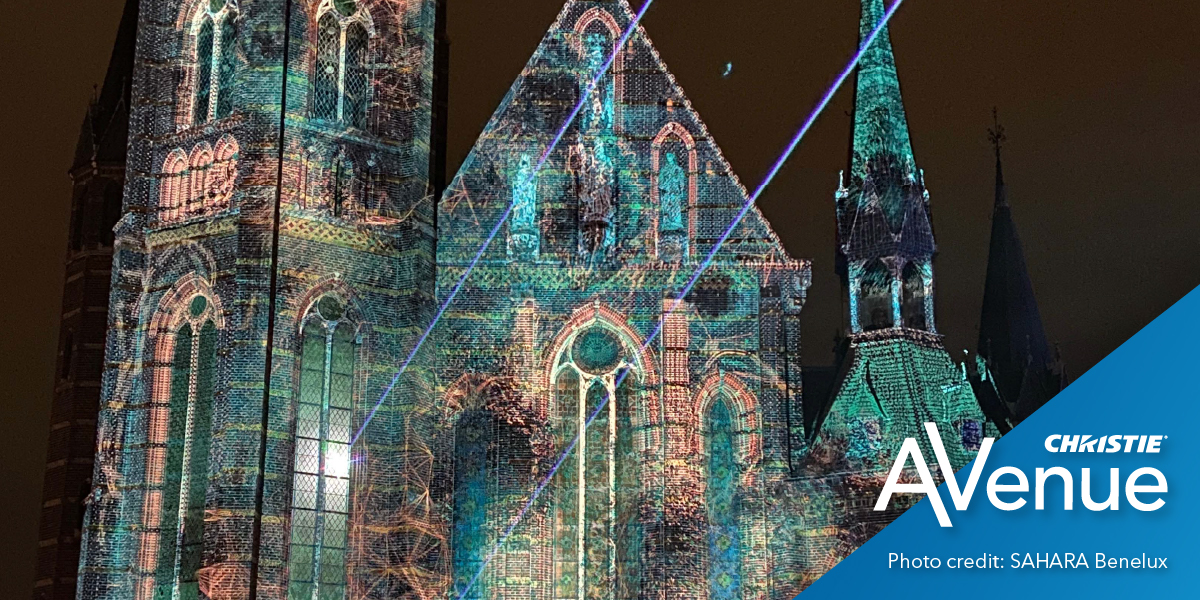 These things aren’t fixed. Sometimes a showmaker finds themselves in the spotlight, center stage and in full view. And what do they do when the attention turns to them? They do what Sahara Benelux did. They put on a show.

AV distributor Sahara Benelux has been involved with GLOW Eindhoven, an annual light art exhibition in the city of Eindhoven, Netherlands, since 2017, working their magic in the background and enabling light artists to turn this into one of Europe’s most impressive light festivals. As Ronald Ramakers, director of GLOW, explains, “2021 GLOW Festival Eindhoven was bigger than ever with about 35 light artists from home and abroad creating some of the most inspiring and innovative light exhibits ever seen at this show.”

As in the past, Sahara had expected to provide equipment and technical know-how, then sit in the shadows and enjoy the show.

Except this time, Sahara’s very own building, their warehouse, was chosen for a projection mapping extravaganza. There would be nowhere to hide, not this time. But what a building to pick, for Sahara Benelux is based in the old Philips Light Bulb Factory, an architectural masterpiece that’s been redeveloped as part of Eindhoven’s hi-tech sector. Sahara may not be the only tenants, but they’re possibly the only ones with illumination in their DNA, just like the original occupants.

And the artist was a local too, Dirk van Poppel could simply nip down for briefings, and if Sahara Benelux needed measurements, they’d merely step outside. This job, if not easy, was certainly going to be convenient. Certainly, a lot more so than one of the GLOW projects they had that year at the church known as Domus Dela. Here French artist Yann Nguema had painstakingly drawn every stone—all 50,000 of them—so his projections would blend perfectly with reality.

But working so close to home is not for the timid. For a start, Dirk van Poppel’s plan was to turn the entire Philips Light Bulb Factory into a diorama with projection mapping on all 4 sides so the audience could walk around it at will. What’s more, there were plans for a virtual reality app that GLOW festival goers could use to scan a QR code on their smartphones and be taken inside the building and inside the content. Undaunted, the shy retiring folks at Sahara Benelux did what any self-respecting AV professional would do. They put on their best Zoom smiles and, with a little help from Christie® Germany, put on a show that Eindhoven would never forget.

So when daylight dimmed and the crowds gathered outside Sahara Benelux’s warehouse and the Domus Dela Cathedral, the audience saw nothing but an exceptional example of what the AV industry does best: a melding of technology and art that transformed a familiar landmark into something new and magical. And somewhere, comfortably exhausted in the shadows, were the team that created the show. Pleased that their own warehouse was magnificently center stage, but happy to be anonymous once again. Check out the video.