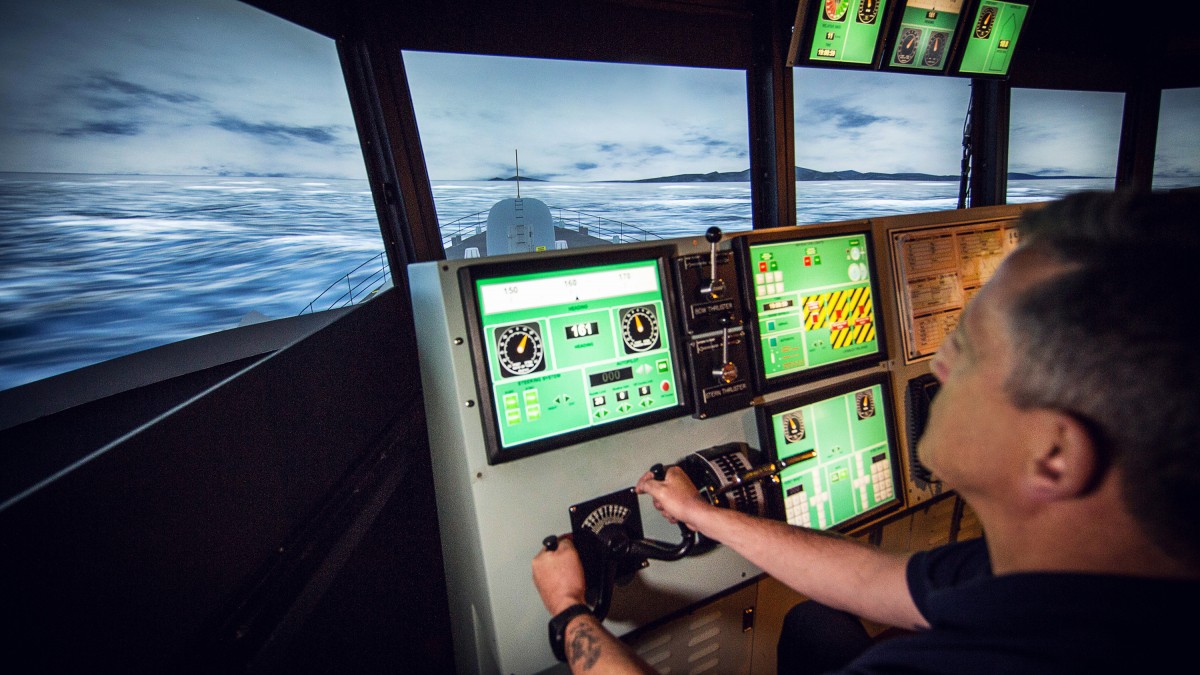 The glory of modern marine simulation is that it no longer feels like simulation. In the hands of experts like the Royal Navy’s Maritime Warfare School it feels every bit as real, and the trainees feel every bit as pressured, yet there’s no danger, no force eight gale, no helicopter.

HMS Collingwood (important shore based institutions are awarded ship status in the Royal Navy) is home to the Royal Navy’s Maritime Warfare School where two identical bridge simulators help train and prepare Officers of the Watch, Navigators and Ship’s Captains. Running fifteen hours a day and at close to 90% capacity these simulators bring the dangers of the North Atlantic safely onto shore – and crews up to the exceptionally high standards demanded by the Royal Navy.

Powered by Christie’s DS+6K-M SXGA+ projectors from the 3DLP M Series – two identical simulators are needed to deliver mission realism and to give a seamless transition from day to night. That night capability also meant using Christie MotoBlend motorised optical blending that maintains the believability of dark scenes. Navigating at sea, at night, is notoriously disorientating and being able to experience this in a safe and controlled environment is hugely valuable – but only when the simulation is truly convincing.

And it is convincing. Seated in a detailed replica bridge, complete with navigation aids and comms equipment, sailors see a complete 270o view projected onto a cylindrical wall – an effect so persuasive it’s hard not to physically lean into turns as your virtual ship heels and rolls through a storm – despite the floor being immovable concrete.

With twenty-one ship models available for use as an ‘Ownship’ (the ship being sailed) and nine geographic areas, the simulation at HMS Collingwood is as flexible as it is credible, and means training can be carried out in almost any class in service with the Royal Navy – from mine countermeasures vessels and aircraft carriers to surfaced submarines and fleet auxiliaries. Commanding Officers about to join new ships can practice handling their vessel prior to embarkation, Navigating Offices can learn the subtleties of navigation in harbours half a world away, and Junior Officers can start their watch-keeping careers under the watchful eyes of experienced Navigation Training Unit instructors.

HMS Collingwood makes the sea a safer place, it makes the Royal Navy a more efficient service – and it makes us more than a little proud to be part of it.