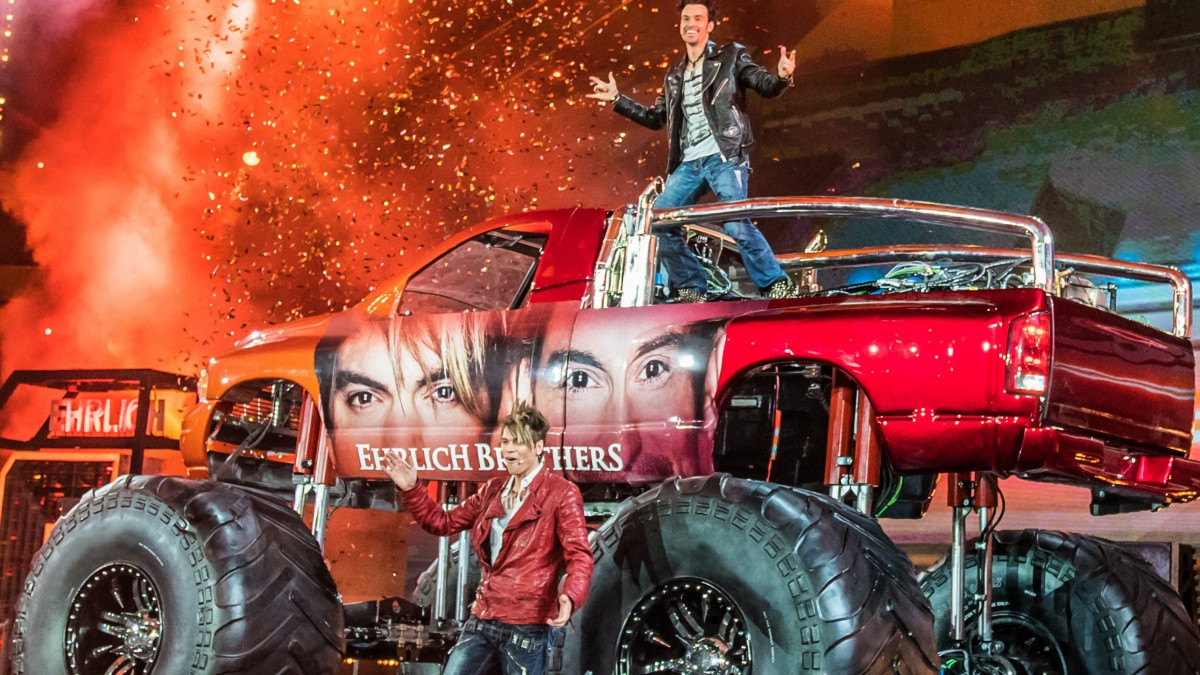 It’s that time of year again. The time when we lie to our children and tell them Father Christmas is real. A harmless little falsehood told to spread a little magic, and one soon grown out of. Except none of us ever entirely do.

So a straight question. Do you still believe in Santa Claus? Didn’t think so. In Magic? Of course not.

And yet… here we are, proper grown-up adults in a grown-up world where logic rules and science has banished almost every superstition yet even as adults we can’t get enough of magic. Of Harry Potter and Alice in Wonderland, of David Copperfield and The Ehrlich Brothers.

And all those superhero movies, what are their powers if they are not magic? We may not believe it’s true, we may know it isn’t true, but boy do we want to believe that it is.

There’s nothing false about illusions

Germany’s Ehrlich Brothers fill stadiums with audiences who love being fooled, and who know Andreas and Christian can’t really make an eight-tonne, 2,000 horsepower monster truck appear out of thin air. They know it’s sleight of hand and misdirection and stagecraft that make it materialise – but there’s nothing false about the adrenaline rush that floods the auditorium when it does.

That really is the magic of magic. It’s a world where we agree put all cynicism aside, a contract of innocence paid in oohs and ahhs and wide-eyed wonder where, to keep their side of the contract, magicians pay in perfection.

It has to be perfect

At the Ehrlich Brothers touring show FASZINATION that means the fifty-strong stage crew has to be able to depend on faultlessly performing technology – the Boxer 4K30 projectors that provide the projection mapping, and the Pandoras Box media server that gives them complete control.

Every day, eleven variable-speed roller blinds and 4K projection have to form a convincing on-stage portal – as Jannik Tödtmann the show’s technical operator explains. ‘The ultimate goal was 4K resolution. There aren’t many products available that can convincingly render this. What’s more, we needed robust equipment that was easy to handle and met the tough demands of a touring show… we have to build and dismantle every day. Size and weight are decisive here.’

Fans of magic can make believe the impossible is true as the brothers’ tour continues through Germany, Austria and Switzerland until May 2018. But don’t think you can’t do the same. Our world is increasing made up of illusions just as fantastic as any the Ehrlich Brothers and their crew create on stage.

Family memories are no more than a collection of RGB values on a pixel matrix, billboards move and movies are bigger, brighter and more convincing than ever before. Illusion is our new reality, but it comes with the same contract magic does – the illusion must be perfect or – let there be no illusion – the audience won’t buy it.

We want useful, everyday, illusions just as much as we want that monster truck to appear, we want the impossible to be possible, and we want more of the kind of practical magic in the world that visual technology is so adept at providing. We want to believe.

We’ll leave the last word on why Christie keep believing the impossible will become possible, and helping those who think the same, to the truly magical Alice Through the Looking Glass.

“Alice laughed. ‘There’s no use trying,’ she said. ‘One can’t believe impossible things.’

“I daresay you haven’t had much practice,’ said the Queen. ‘When I was your age, I always did it for half-an-hour a day. Why, sometimes I’ve believed as many as six impossible things before breakfast.”