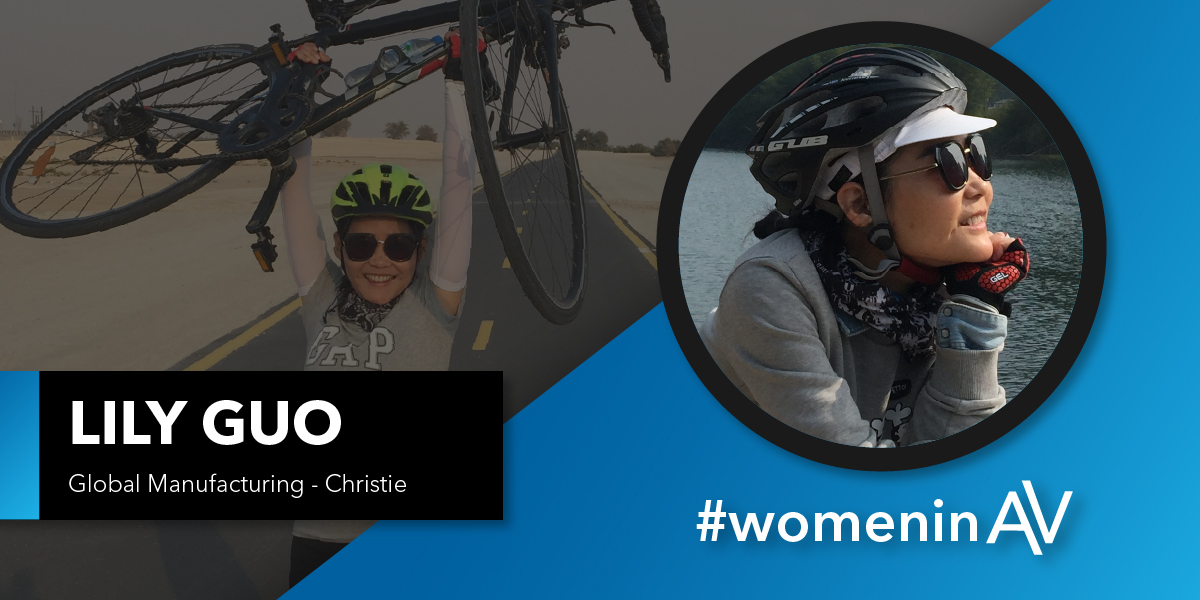 At 5.30 a.m., when most of us are blissfully unaware of the dawning of the day, Lily Guo is already out, on her bike, on the still-quiet streets of Shenzhen, China, pedaling hard, training for her next trip away, and mentally planning for her working day.

You see, Lily is not given to going into anything in any way underprepared.

It has been ten years now since Lily joined Christie’s Shenzhen plant, responsible for building the team that would set up the financial systems and controls that still keep it running today. True, Shenzhen was producing fewer models then than it does now, but it was a considerable undertaking in a brand-new facility – and testament to Lily’s detailed eye. And as Shenzhen’s importance has grown over the years, so too has Lily’s role. Lily’s territorial jurisdiction knowledge of taxes and customs allied to her detailed, consistent and open-minded nature now helps her team control regional operations, the tricky task of customs clearance, and balancing raw material costs from worldwide suppliers with the finished product price.

And if that makes Lily sound wholly work-driven and one-dimensional, nothing could be further from the truth. She may be good at her job, but there’s far more to Lily Guo than that.

Take those early morning bicycle rides. Outside of work, Lily’s other great passion is cycle-touring, and she has a trip planned around Qinghai Lake. Now, she tells us the scenery’s beautiful, but this, the largest lake in China, sits in a hollow of the Tibetan Plateau (Yes, the same Tibet Plateau as Mount Everest). It’s 223 miles (360 kms) around and a high-altitude cycle ride so challenging that there’s even a professional road bike race. Some way to wind down from such a full-on job.

But then as Lily herself says, she’s “always liked to find new challenges for myself, I’m always on the lookout for the next thing that will push the limits, it’s how I keep engaged and keep growing.”

You might have thought then, that when the Covid Crisis shut down the Shenzhen plant and much of Shenzhen with it, Lily’s biggest problem would have been boredom. Far from it. She’s taken advantage of what she calls “my quiet times” to re-examine and rework every financial system from top to bottom. Making sure that, when things do return to normal, her part of the organization will be even more efficient and even more responsive.

It is quite common to meet people in business who talk the talk but somehow fail to walk (or in Lily’s case cycle) the full distance. But in just a few moments of talking to her, you’re left in no doubt that what she says is what she is and who she is. Someone who will push at any limits she is set and take on any task.

We think we’re lucky to have her working at Christie; we’re just not joining her on a bike ride any time soon.