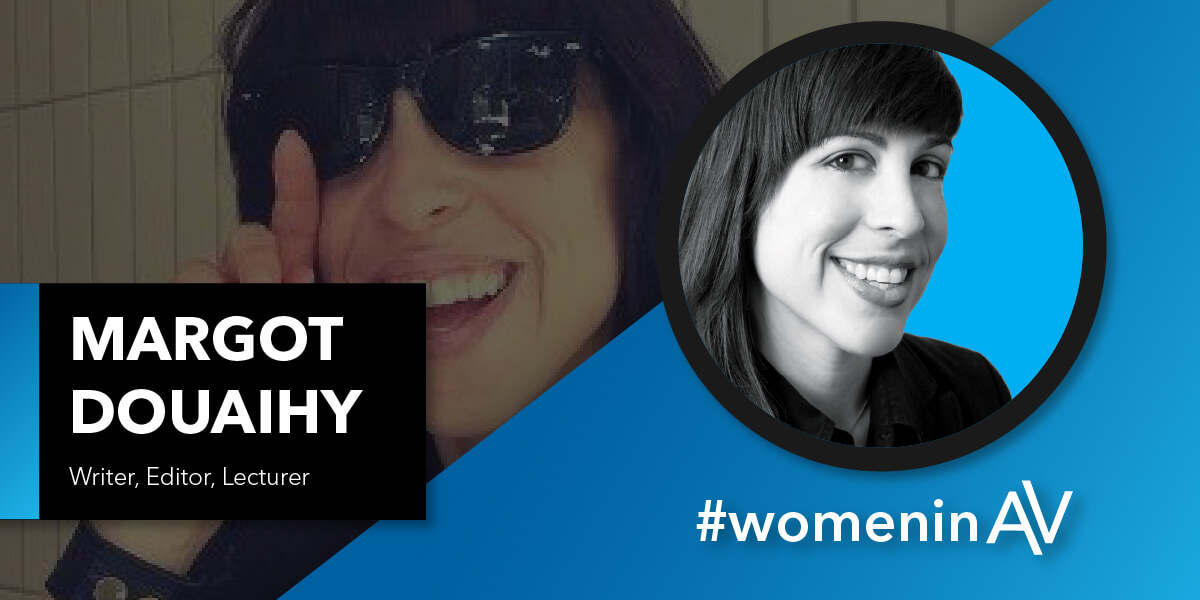 Polymath, Renaissance woman, Margot Douaihy is many things. An author, a lecturer at Franklin Pierce University, and an explorer of AV, artificial intelligence, storytelling, and art. You’d expect to find her firmly at the center of things.

But you’ll find she’s happier at the edges and intersections because that’s where all the interesting stuff happens.

In her novels, she reconstructs the hardboiled private investigator archetype through a queer lens, and in her teaching? Well, enter one of her creative writing classes, and you’re just as likely to find her students immersed in VR headsets as reading Thomas Hardy novels. Creative writing – indeed creativity of any sort – has as much to do with diversity of thought as anything else. And if VR or IT is where that’s at, that’s where Margot and her students will go.

Perhaps Margot and Christie have become intellectual allies because of just this. Christie’s origins are in cinema‘s art-driven roots, and we retain that fascination for imagination and invention today – the artists who drive it and the technologies that enable it.

Margot cites Christie’s Design Award at the University of Waterloo as an example of how ‘This is a new world, and students do need access to the tools that create it as well as immersion in its ideas. I believe that we live in the technological world and that the polymaths among us have a moral imperative to think holistically about making technology available to everyone.’ And she adds a note of caution to those of us who naïvely assume new generations will have an empathetic understanding of the technology they use and therefore require no instruction.

‘It’s wrong to assume that just because teens and Generation Z were born with mobile phones in their hands that they actually know how the technology works. They don’t know how it works. Ask them about user privacy, ask them about data, they have absolutely no idea because it’s hidden beneath an elegant, intuitive tech shell. So, we have a duty to make them aware of its shortcomings as well as its many advantages.’

Reaching the edge of ideas

But she says she’s very cautious of painting with a broad brush because, “As addicted to technology as they may be, what our young folks in their teens and 20s do have is an incredibly quick ability to connect disparate points. So, while we may bemoan their short attention spans, they’re often more expansive in their thinking and quicker than we are.’

And maybe that’s because technology itself is allowing them to explore the intersections and reach to the edge of ideas in ways never possible before, exposing them to a wide diversity of sometimes contradictory voices. The edge where Margot feels the good stuff happens – provided they have a guide and proper understanding of the tech that takes them there.

As Margot says, it’s not at the center of tectonic plates where mountains get built, but at the boundaries where they meet.